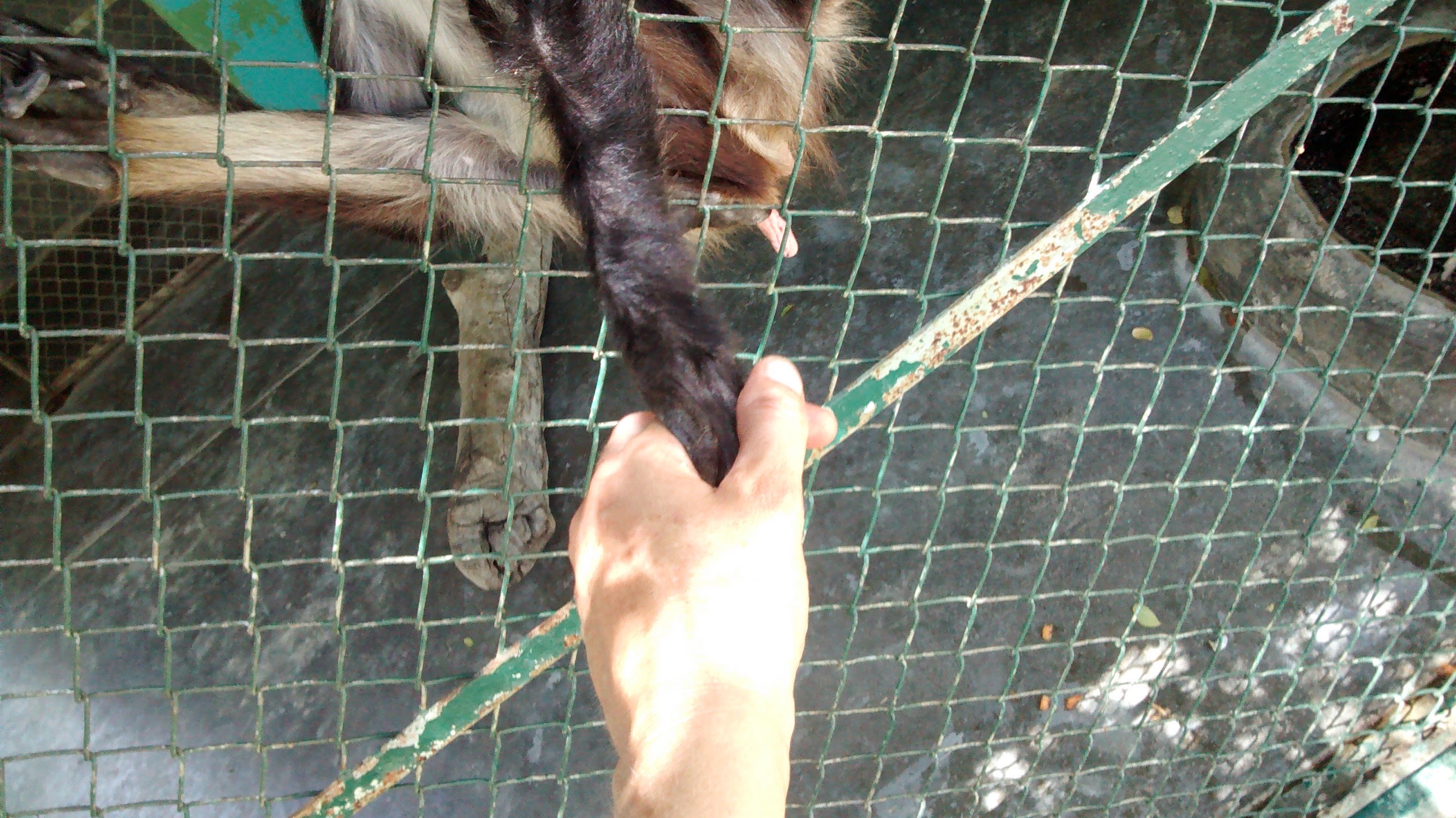 For a few days I have been thinking of sharing another excerpt of my book, and this will be the last one 😉 I can’t publish too many excerpts. Two will do just fine, I think. 😉 This one is very different from the last story, which delved into the lives of the six girls at the club information desk. Now, we will dive into Mathilda’s world. Mathilda is a little spider monkey who won my heart many years ago. Mathilda and I share a lifelong friendship and whenever I see her, she gives me a loving hug.

I decided to include Mathilda’s (true) rescue story on my blog, because it is a story that is close to my heart, and Mathilda is one of those beautiful souls that touched me in this lifetime. She and I are friends for life.

Spider monkeys are truly amazing animals. They have the highest intelligence among primates and according to a spider monkey expert I met during my rescue mission, they understand much of what we humans say. Because of Mathilda I also met other rescued spider monkeys, and with some of them I established beautiful bonds; or shall I say, they initiated a bond with me. They chose me to be their friend, which was a great honor to me. They are unforgettable, and I hope that I’ll be able to visit them again soon.

So, here it is, a small excerpt from Mathilda’s story. If you’d like to hear me read this tale, please scroll down down for the video 🙂 (and subscribe to my YouTube channel, if you like it 😉 )

She was a cute little thing, swinging from that little branch or hanging upside down from the pink cloth that was attached to the branch. A scrawny, little spider monkey with a single branch that belonged to no tree. Instead, the wood was attached to metal bars and the ground was not the soft, moist soil of the rain forest, but a stark cement floor. That cage was Mathilda’s world. She couldn’t do much in there, besides swinging from the pink cloth or pacing her small prison cell. She could see some of the other animals that shared her fate, all locked in similar cells or in tiny enclosures, condemned to a life of boredom and loneliness. 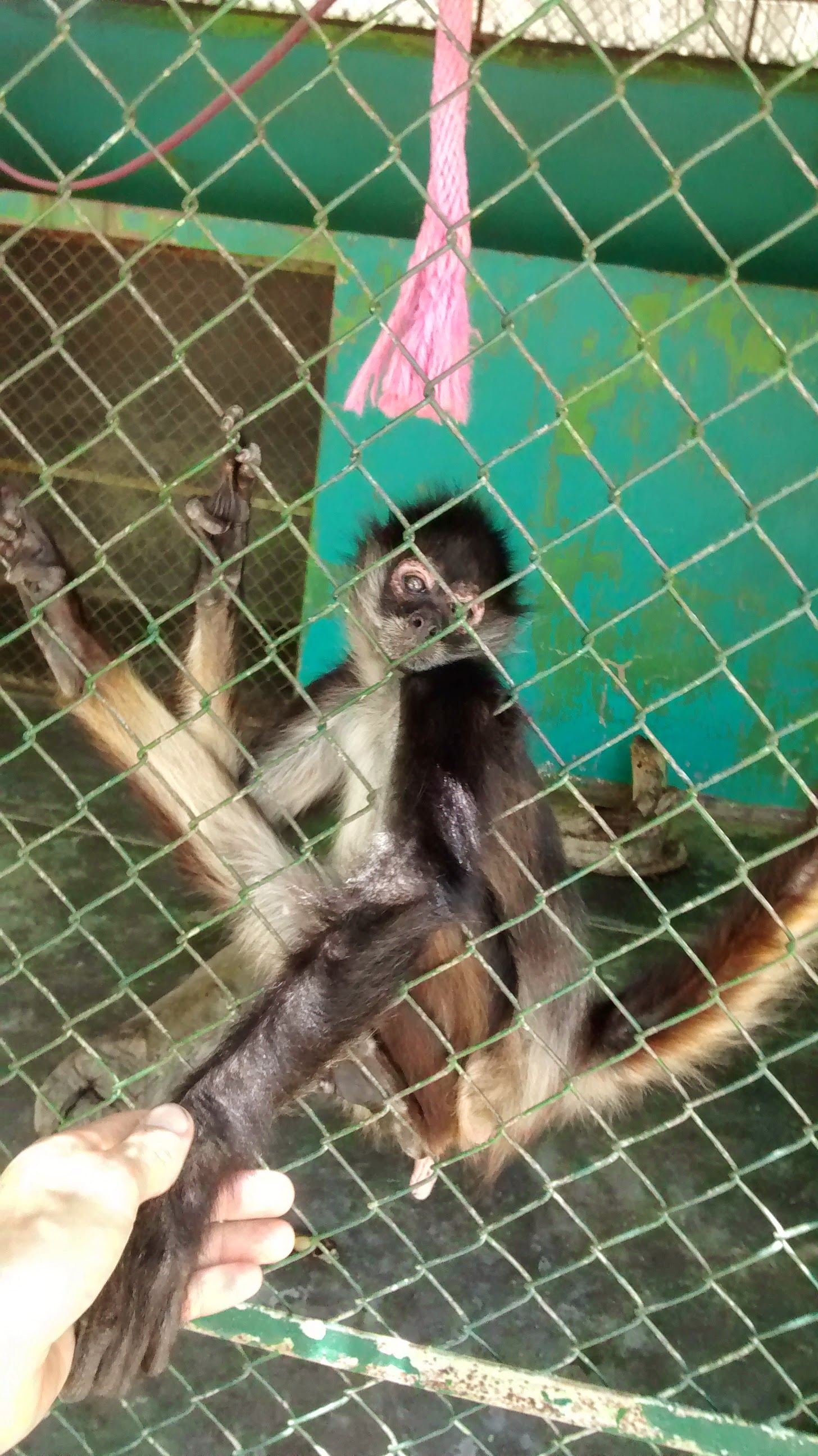 Mathilda used to have cellmates, but they had all perished over the years and now she was the only spider monkey left, all alone in her cage, with no one to play with. She would often stand there and stare out over the ground or just sit morosely in a corner. Sometimes she would resume her endless swinging, but it never took her anywhere, it was always the same old branch.

Humans came from time to time and gawked at her through those bars. Their children pointed at her and made comments about her. Mathilda did not always like all visitors, but she approached a few. Some of the humans gave her snacks. Others held small gadgets up at her which flashed bright lights. Some humans were horrified at the barren cage with the cement floor, and they looked at her with compassion in their eyes, knowing that she wasn’t happy where she was, but she had long learned that they couldn’t help her. They would go home and not return.

One day a new visitor came, a woman with a mane of golden curls on her head. Mathilda felt her compassion too, but there was something unusual. This human spoke to her. She didn’t utter any of those silly baby sounds, neither did she shriek in delight when Mathilda made some funny movements. She spoke to her, and the monkey listened while studying her face and unruly hair.

She told her a story about a tiger she had seen in this zoo many years ago, an emaciated tiger with whom the woman had bonded. He had spent his time pacing his cell, from left to right, one side to the other, again and again, never ever stopping, ignoring the humans who came to stand around his cage and gaze at him. He never gave anyone the dignity of even a brief glance. He did not care. However, he cared about the curly-haired woman. The first time she came, a man accompanied her, and when the tiger saw her with him, he stopped pacing, stared at the man and growled at him menacingly, satisfied how easily he had frightened the human. 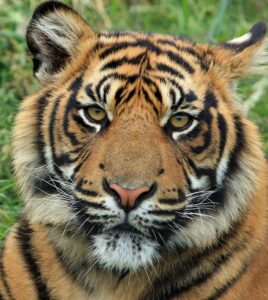 Whenever the man got too close to the woman, the tiger threatened him, and he even once positioned himself in attack mode, which the woman recognized. The man urged her to leave, not trusting the hole below the cage which could likely be enlarged by some serious digging. They left soon after, but the woman returned a week later, alone. The tiger was pacing again, ignoring the humans that gawked at him. When the woman arrived, he felt her presence, looked up, and walked over to her. The other humans had already left, and they were alone now. The woman took a seat on a bench near the cage and the tiger lay down by her side, separated by the bars and wire. They were so close that she could touch him.

A bond grew between them and she came to see him often, her heart bleeding for his misery and hunger, but glad that he somehow found some sort of harmony in her presence – as little as it was. She made the long drive nearly every weekend, to spend some time with him. Every time she visited the tiger, he would stop pacing and look into her eyes, without any menace. His eyes conveyed his understanding of her compassion and love. They had bonded, and he trusted her. She was the only one he felt at peace with, and wherever she sat, he would lie at her feet, content and relaxed.

One day, the woman made him a promise. She always felt terrible at the sight of his bones protruding through his skin and the desolation of his life. She promised him that she would get him out of there. She didn’t know how and when, but she was going to do it. She continued visiting him, but one day she stopped coming.

Mathilda understood much of what humans told her, and she remembered that tiger. He had died many years ago, all alone, skin over bones, withered away in his cage. The woman already knew that, and she was heartbroken over it. She had been unable to keep her promise to him, but she made a vow to keep her promise in his honor and make it her mission to get Mathilda and all the other animals that were languishing in their cells out of there. She gave the spider monkey her name, Mathilda.

She also went to see the other animals and bonded with several of them, but Mathilda knew that she was her special friend, she and Felix, the coatimundi. Felix sometimes cried when the woman left, he was very attached to her. Even the coyotes, who were shy and terrified of visitors, gazed at the woman with curiosity, realizing that she was there to do something for them. The female always remained in the back of her cell, but after a few months, the male dared get a little closer and stood in the middle of the cage, hesitantly looking at her, wanting to approach but still too frightened.

The woman told Mathilda everything. She told her how hard it was. She spoke about many things Mathilda didn’t understand, a petition, signatures, a Facebook page to help them, emails, letters, phone calls, long drives to the state’s capital, fighting the mayor, meetings, etc. Mathilda wasn’t sure what it all meant, but she understood that all these things were done to help her. 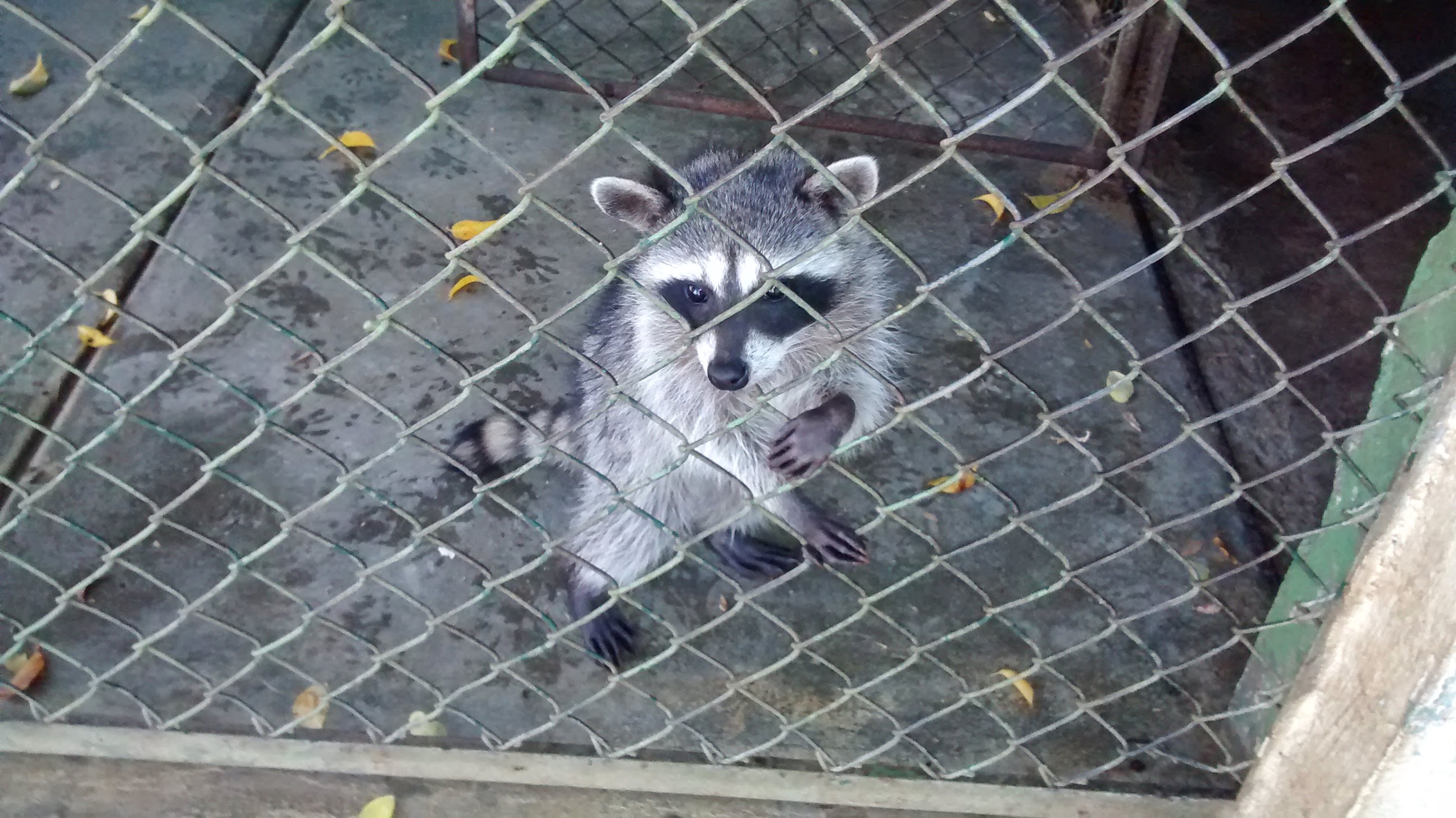 When the woman was there, Mathilda always took her hands or her arms in hers and for good measure she also rolled her tail around her arm, holding the woman in a loving embrace, as much as the chain link allowed it. They spent a lot of time together. Sometimes she watched the woman walk around the zoo and count the animals, check their water and food, and note if anything was wrong or if the number of animals dwindled, but she always reserved special time for her little friend Mathilda.

It took a long time, a year and a half, but Mathilda had faith. Only once did the woman fail her. Her cage door was unlocked. The woman had not noticed, but Mathilda had, and she was eager to point it out. She moved her fingers towards the place where the lock hung. She could not reach it, but she knew that the human could. The woman stared at the open lock, not believing what she saw, and the thought of opening it must have crossed her mind. Mathilda hoped that she would do it, now that she had realized her chance of escape. Surely, she would let her out? But that day the woman disappointed her deeply. She didn’t open the door.

She told her that she couldn’t do that; it would ruin her campaign and it would get her in trouble. She explained that they had to do it the right way, not take foolish risks and jeopardize everything. Mathilda was sad and angry, and she turned away from her, showing her displeasure. This had been her opportunity and the woman had wasted it … Why could she not have opened the door? It would have been so easy … but all she did was hold that little gadget to flash a light at the open lock, telling her that she needed to take pictures for evidence. Mathilda did not care about that. The woman was sorry, and she knew it. She felt bad, and the little monkey understood then that she wanted nothing more than to free her right there but was afraid to do so.

“Please trust me,” she pleaded. Mathilda did as she asked, placing her faith in this woman that she had grown to love.

I hope you like this small excerpt. It is very different from my last one, and throughout the book I made sure to avoid same or similar patterns in stories. Every tale is different, and sometimes there’re even different genres. If you’d like to see more tales from Los Cabos, this wonderful place in the Mexican Baja peninsula, just open my book and dive into my memories (and some fiction too) 🙂

Spoiler alert: I never give away spoilers, but I’ll add this one, because I know that the photos in this article are sad, and I just want to reassure my readers that all animals have been rescued from that horrible situation. The zoo where Mathilda and the other animals were kept is closed, and the animals have either been relocated to sanctuaries or rehabilitated and released into the wild. Mathilda is living in a beautiful sanctuary in Mexico, and the last thing I heard is that she even has a boyfriend now, a sweet spider monkey whom I also met. He is indeed a little darling, and I wholeheartedly approve of him for my little friend 😉