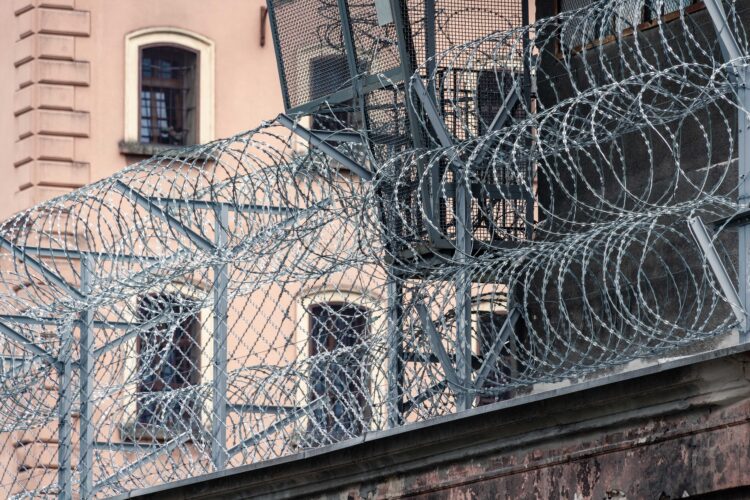 As I mentioned in my previous post How Writing to Inmates Changed my Life, here comes the first of the three letters I received. This one was written by Harold M. Laird, who is imprisoned in a separate segregation unit. We all know about ad seg (administrative segregation) but until recently I had never heard of separate segregation. I thought that ad seg was the ultimate punishment, but apparently there is worse …

My name is Harold M. Laird TDCJ #659512. I am writing this with hopes to bring attention to the area I’m housed in.

The area I’m talking about is called ALU (or separate seg. or super seg. or AS-A ADMSEG, depending on who you talk to) and is on the Coffield Unit.

This area “officially” is nothing more than another ad seg (or restrictive housing) cell block. However, its official status and its true use are two different things.

You see, this area as it’s used does not exist in any policy or TDCJ procedure. It’s used to isolate the influential, the Rubble rousers, the prisoners who fight against the system, the problem child the system can’t control, etc.

That may sound reasonable to some, but the problem goes much deeper. By TDCS policy Ad seg is the most restrictive harshest security restraint they have. But when Ad seg. will not be “punishment enough”, ALU becomes the place they put you in.

The difference between normal Ad seg. and ALU is extreme. The major differences are: 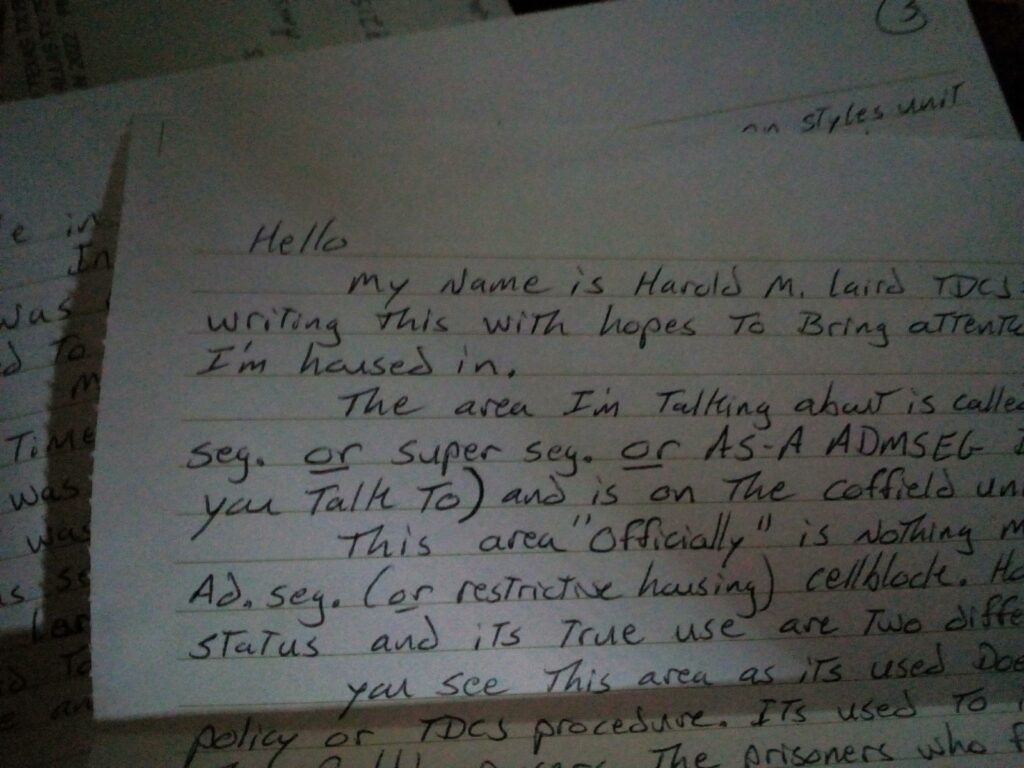 During my time in ALU I have personally been assaulted twice by prisoners trying to get out of this area, once very seriously.

I have witnessed three other prisoners get shot with arrows, one of which died.

I’ve seen four officers get stabbed (one in the eye, two in the head, and one in the knee).

I’ve seen other offenders gain access to other people’s cells on four occasions, two of which ended with serious injuries (one of those I filed a civil lawsuit on in the Federal Court’s Eastern District back in 2008 – Harold M. Laird vs Gerald Gower)

I’ve witnessed 10-12 officers assault prisoners, and have heard of multiple violent acts happen before I got here.

Why am I here? That’s a two-part answer.

First, I was placed in ALU in June 2004 at the request of the Office of the Inspector General (OIG) because two captors assaulted me in the Gib Lewis Units High Seccurity Building. I passed two polygraph exams and my complaint opened a huge investigating over 300 uses of force in a two-year period.

I filed a lawsuit on this in the Eastern District of TX Federal Court (Harold M. Laird vs Clifton Mattox et.al.) in 2005, went to trial on it and lost.

That incident is what got me transferred from Gib Lewis H.S. to Coffield ALU.

Second, why I was on Gib Lewis H.S. to begin with played a role in my placement in ALU.

In 2001, I escaped from ad. seg. on Styles Unit and was re-captured two days later in Mississippi. When returned to TDCJ I was put on Gib Lewis H.S.

My escape from TDCJ happened at a very hard time for them. They had just settled a big lawsuit that was supposed to make TDCJ more secure from escapes (the suit was from the family of the police officer killed by the Texas seven escapees). TDCJ took my escape personally as Larry Todd, the media spokesman for TDCJ, at the time clearly said to the Beaumont newspaper: “Harold Laird blacked our eye and we take that personally.”

Due to them taking it personally I was forced to undergo much mistreatment at the hands of officers on Gib Lewis H.S, which led to the captors assaulting me, etc, which ultimately blacked their eye again so to speak.

So, since I had given TDCJ two black eyes they put me in ALU and 17.5 years later I’m still here. I’ve been told by multiple TDCJ officers that the only way I’ll get out of ALU is parole or death.

Well, I’m a fighter and they ain’t broken me, so I’ll keep on fighting the hypocrisy and injustice of this system.

Since I’ve been in ALU I’ve been featured in two TV shows. “I (almost) got away with it; Got to be a Macgyver” and “Breakout, the real macgyver”

Over the 30 years I’ve been incarcerated I’ve lost contact with all my family and friends. So, I’d love to make some new friends and experience new things. There’s always so much to learn from others and I’m definitely down with learning. So, if you’d like, please contact me at: